Fannie Friedman was born in Będzin in 1910 to Moishe and Chaya (Fishel) Wechselman. She was the oldest of ten children (four girls, six boys). Moishe was a horse trader and Chaya a homemaker. The family owned a home at 78 Modrzejowska Street, which also housed the horses. In their religious home, Fannie’s father was strict and expected all his children to be deeply observant. On Friday night, a “Shabbos goy” would come into the house to braid all the girls’ hair, light the stove, and do the work that the family could not do on Shabbos.

Prior to the war, there was already antisemitism in Będzin. One day, when Moishe was crossing a bridge on his way to the synagogue, men taunted him and calling him “dirty Jew.” As the story goes, Moishe picked up one of them and tossed him over the bridge.

Keeping up the household required a lot chores that Fannie helped with: clothes had to be boiled for washing and the wooden floors cleaned. Despite life’s hardships, Fannie spoke highly of her life in Będzin. She described it as a lively and beautiful place, with lots of cafes for young people to congregate. Fannie loved going to the movies with her girlfriends. She was her father’s favorite child. She was the only one among her siblings who attended the private Gymnasium school. Her mother sewed her beautiful clothes and her father bought her a fur coat. She freely traveled in trains by herself all over Europe. In the summers, she stayed with relatives in Germany and Belgium. 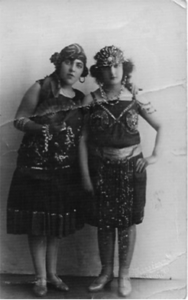 When Fannie got engaged to a tailor, her father started building a home for them on the property, with a tailor shop on the bottom and living quarters on the second floor. But the engagement was called off. Fannie later married Sigmund Friedman from Sosnowiec. Sigmund was an American citizen who had returned to Poland in 1928 to find a hometown girl to become his bride. His father knew Fannie’s father, and this is how they were introduced. They fell in love and married in Warsaw, Poland at the American consulate. Hundreds of people came to the train station to wish them well as they left for Warsaw. Sigmund returned to the United States, leaving Fannie in Sosnowiec for a year with his parents. Papers finally arrived that allowed Fannie and her in-laws to leave for America, settling settled in Cleveland, Ohio. They had one child, Arlene.

While Fannie avoided the atrocities of the Holocaust, many Wechselman family members were sent to concentration camps, and only a few survived. The land the family owned in Będzin was taken over by the Germans. The home was destroyed and a fire station built in its place.

One of Fannie’s younger brothers, Ben Wechselman, was a well-known soccer player. Married to Esther Blouger, they had one baby named, Max. Ben was taken to a concentration camp; Esther was rounded up with other women and children. During the round-up, Esther was shoved by a Nazi wielding a bayonet, leaving her with a permanent scar. She held her baby in her arms as she was led to a soccer field where she lined up in front of a firing squad. Thinking she was going to die either way, she made a run for the woods, baby in her arms. Although shot, she made it to a farm where she was hidden by a family until the end of the war. Miraculously, she was reunited with Ben at a DP camp after the war. Ben, Esther, Max, and three of the surviving Wechselman brothers were eventually reunited with Fannie in Cleveland, Ohio.